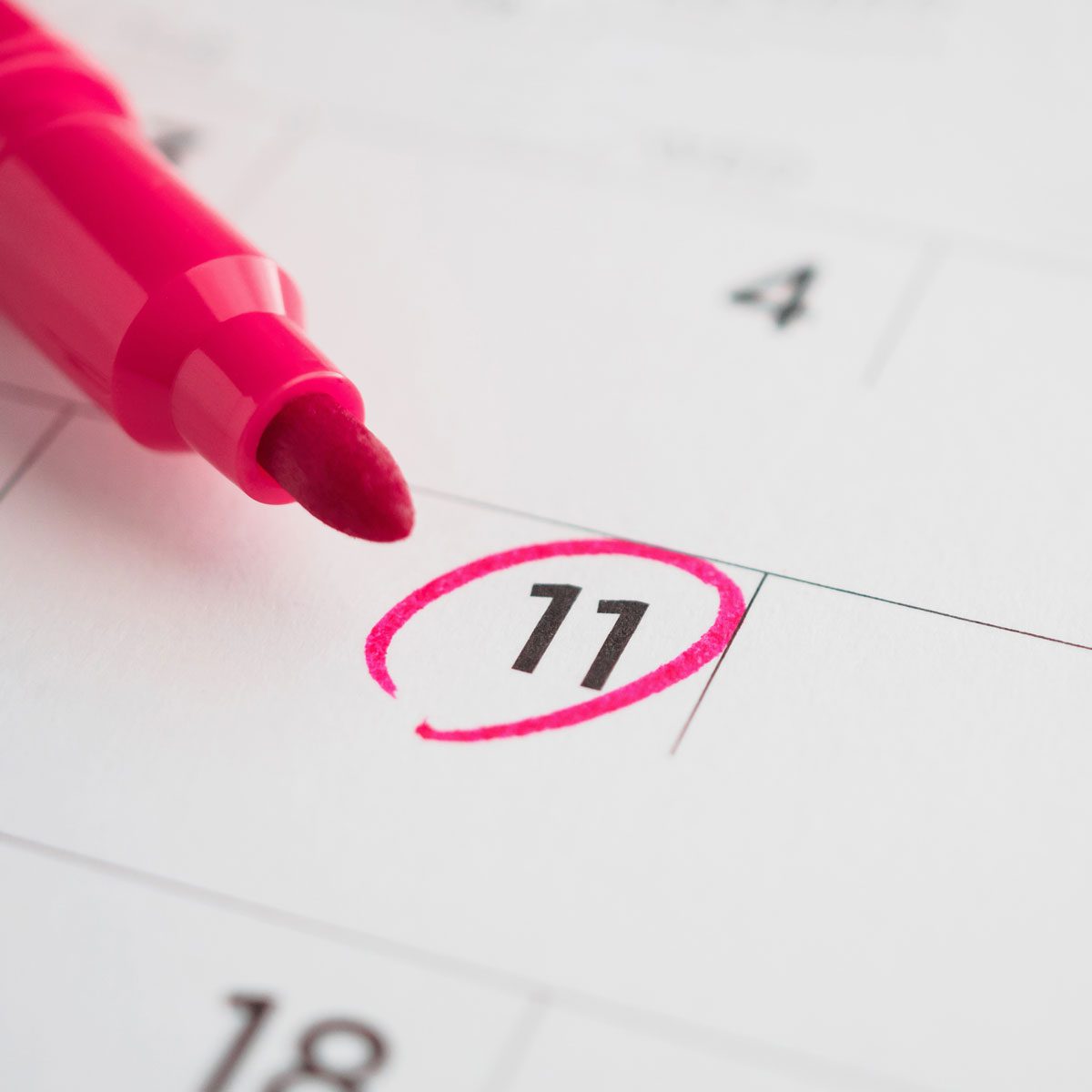 Moving Away from the “Online Only” Giving Day

Giving Days have become the current trend in giving campaigns for higher education – and non-profits in general. Giving Days are designed to be a fun and engaging means of fundraising. Oftentimes, there are specified projects, initiatives or funds these projects are centered around. There can be giving challenges, matching funds or perhaps just fun activities to keep constituents interested throughout the length of the campaign.

As opposed to solicitations that appear over an entire semester, it’s much easier to keep people’s attention with a day-long campaign. It’s a crowdfunding campaign on caffeine… A LOT of caffeine.

Back in 2012, I was working at the Florida State University Foundation and played a role in starting their online campaign, The Great Give (now called FSU’s Great Give). I’m not sure if it was the first ever online campaign, but it had to be close. Getting buy-in was tough. We were kind of on our own to make something happen.

We didn’t have the road map or best practices that can be found online today. If anyone embraced the “throw stuff against the wall to see what would stick” mentality, it was our annual giving team. It wasn’t until we started planning for Year Two that we discovered a unique giving day campaign used by a non-profit in Richmond, Virginia. That campaign led us to restructure our event by featuring wide array of projects and initiatives across the university that would spark the interest of their alumni base.

What we did at FSU – and maybe they are still doing – was done strictly online using email and social media. Most schools have a digital/social media coordinator at their disposal to help promote their online messaging. Even if you don’t, most people have sufficient social media experience to at least fake it. That doesn’t necessarily mean your giving day communication is limited to those choices. What else can be done to diversify giving day options for your donors?

Can Direct Mail Be More Than Just Promotional?

JHL Advance recently worked with two schools in Wisconsin who incorporated a mail piece with the giving day. Let’s see how each did.

In fall 2020, the University of Wisconsin-La Crosse (UWL) held their inaugural giving day. The “UWL Giving Day” was scheduled on “Giving Tuesday” which notably occurs towards the back end of fall semester. As a means of testing response, UWL included a self-mailer as part of their marketing strategy.

According to Taylor Wilmoth, director of annual giving, the mail piece served multiple purposes. With it being their first giving day, its primary function was promotional. It also acted as a donor acquisition piece as they targeted a large population of non-donors, traditionally a tough group to reach through direct mail. Lastly, it included a tear off and an affixed reply envelope to allow for gifts to be sent through the mail.

As far as gifts made through the mail, they tallied up 263 gift which was slightly less than two percent of their entire mailing list. Not awful for a piece targeting non-donors, but perhaps not enough to justify a similar style mailing in the future. 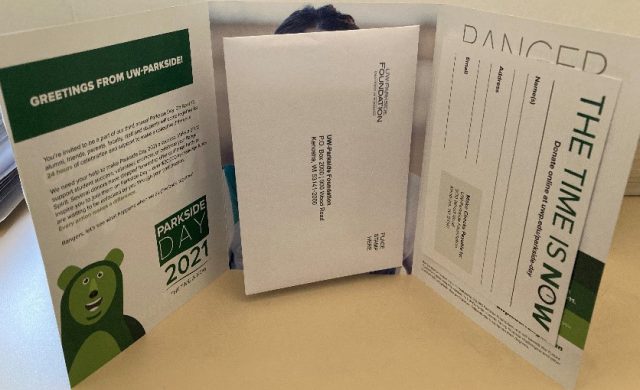 The University of Wisconsin-Parkside (UWP) took on a similar strategy with their Parkside Day which took place in April 2021. In Year Three, their giving day saw 608 donors give a total of $218,867.

Much like the piece from UWL, the piece from UWP was also promotional in nature, but a bit different in presentation. Their trifold piece included both a reply card and envelope affixed on the inside. Because of the amount of information shared on their piece, including volunteer details and their Ranger Run, it wasn’t able to be used as a self-mailer and was mailed out in an envelope.

UWP had a goal of bringing in 500 donors which they exceeded as well. Here are some other notable details:

While this campaign has taken place for the last three years, they have removed any spring annual campaign solicitation prior to the event. Linnea Booher, director of donor and alumni engagement, said all Foundation communication from February to April is directed towards Parkside Day. It isn’t until after Parkside Day concludes that they finish up their spring semester with a final spring appeal in June.

A few takeaways from these examples:

Phone usage has changed over the years as cell phones have become more prevalent and general skepticism towards legitimate phone solicitation has increased. Unfortunately, student call centers have played a diminished role in overall fundraising. At some schools, calling programs no longer exist.

For schools that have retained a calling center, why not make your calling center part of the giving day campaign? Instead of soliciting and collecting gifts immediately over the phone, students can be trained and given scripts directing your prospects to simply make pledges and ask that fulfillment be put on hold until your giving day. Even if a pledge isn’t made, you have made a touchpoint with an alumnus who may use another giving method later on.

You now have a collection of potential donors and pledges that you can mail a specially branded and messaged pledge reminder, or send an email on the day of the campaign with a link asking them to fulfill now. You could even have your student callers make a follow-up call during the event to see if those donors have fulfilled their pledge and offer to help them if it is still outstanding.

While not all phone pledges are fulfilled, this could give you an idea of where you stand with any goals you may set and whether you need make some adjustments based on your phone participation.

Is your Giving Day your only campaign or one of many?

With a sizable alumni and donor base, large universities solicit for multiple funds and programs utilizing mail, phone and email numerous times throughout the year. Even with all of these other gifting options made available, their giving days can easily bring in millions of dollars. Here are a few examples from spring 2021:

Universities and colleges with smaller alumni bases and lesser resources may not have that flexibility. (In some instances, their student body is smaller than the donor count of the campaigns listed in the examples shown above.) Both the unrestricted fund and scholarships play a more prominent role for solicitations for programs funding and tuition relief for students.

Much like UW-Parkside, have you considered putting all of your eggs in one basket to target your giving day? Not many schools will prominently announce their annual campaign results that take place over the course of a given semester or year. Trim it down to one day and suddenly those numbers might be something to brag about.

For smaller state and private universities, it’s not about competing with the “big boys.” It’s about school pride. Not only can it get everyone engaged for your overall annual campaign, but it can provide a boost and give your entire community a sense of accomplishment.

Finding the Risk vs. Reward Balance

With anything in fundraising, there is always a balance of how much risk you are willing to take vs. how much reward you are likely to receive. The smart move is always to do the research nd follow best practices. In the rare chance that your idea is so unique that best practices aren’t readily available, you’ll need to decide if or how you want to test the waters, track your results and document what you discovered.

As mentioned earlier, it often comes down to budget and resources. Before going all in, you can create a test segment and see what kind of results you get. Talking to colleagues at other schools who may have some insight based on a campaign with some similarities may be another option to consider.

From our end, you are always welcome to talk to us about your mailing campaigns. No matter your audience or your message, we can work with you to find ways to stretch your budget, reach more people and bring in additional dollars of support to your institution.