Extending Your Brand’s Shelf Life: Placing a Premium in your Direct Mail

Have you ever grabbed a free sample while shopping at a grocery store? Or walked through an exhibit hall and snatched some tchotchkes from an exhibitor? Or binge-watched an entire series on a streaming service during a free trial period?

People like free stuff … even when we don’t necessarily need it. I can’t tell you how much free stuff I’ve gathered in my lifetime that I later tossed as clutter. Nowadays, it’s mostly my kids who think they REALLY need it – until it goes missing and we find all of it a few weeks later, shoved under the couch.

Different types of marketing mail have varying “shelf lives.” Postcards, letters and self-mailers each have a place and purpose in your communication plan, and can elicit their own response in the hands of your alumni and supporters.

When it comes to brand recognition, those little giveaways – and how they‘re used – can leave a lasting impact on your alumni and supporters.

Surveys have found that nine out of 10 consumers have at least one promotional item in their kitchen, and three out of four have a promo item in their work area – and if they have one, they’re just as likely to have five or 10.

Remember, not all free stuff is bad. If used strategically and with a purpose, those pieces become less about “the mess,” and more about “the message.” With direct mail, there are a number of free-stuff options that can extend the shelf life of your mailing, brand and message with your audience.

I grew up in Milwaukee and have watched Brewers baseball all my life. I’ve attended Opening Day for the last eight years, and each year I walk away with a free magnet schedule.

I have the schedules for the last five seasons on my refrigerator – not because I want to know who the team played before the All-Star Break in 2018, but because they now hold up something else.

(Turns out I’m not that unusual. The Advertising Specialty Institute has found that 57% of customers keep their promo products for more than five years.)

In the case of my magnets, I can’t get rid of the magnet or the art project, so both remain. They keep my kid’s art project hanging where I can see it – and they keep the Milwaukee Brewers brand front-and-center.

In fact, according to stats from magnet manufacturer US Magnetix, “It’s been estimated that the average person will visit their fridge between 10 and 12 times a day. That’s over 4,000 [brand] impressions a year. And considering six in 10 people hang on to promotional products for up to two years, a single magnet could get you upwards of 8,000 impressions.”

In the case of my oldest Brewers schedule, that’s about 20,000 impressions. 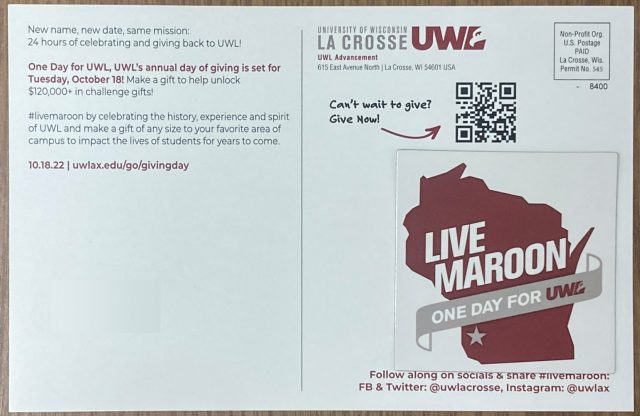 Magnets come in many shapes and sizes, and can just as easily live on file cabinets or even marker boards as opposed to refrigerators. The size of the magnet, whether it’s a standard cut or a custom outline, determines the cost. The simpler the cut, the less expense.

Magnets are easily inserted into an envelope or adhered to a card – even postcards. They can be used for either stewardship or solicitation purposes, but either way, they hang around a long time.

The University of Wisconsin-La Crosse recently did a postcard mailing with a magnet to promote their 2022 Day of Giving. The magnet featured a UW-La Crosse event logo, while the postcard had specific details and a QR code that directed people to a special page on the UWL website.

The QR code and date on the postcard was no longer current once the event ended, but each recipient has something in their kitchen or office that has the UWL brand and may remind them to look into their university’s Day of Giving in subsequent years.

Window clings are another easy way for your recipients to display their relationship with you. Clings are made of a thin tacky plastic film and are a great way to show affinity, as they can displayed on the windows of automobiles or glass fixtures within a home or office. 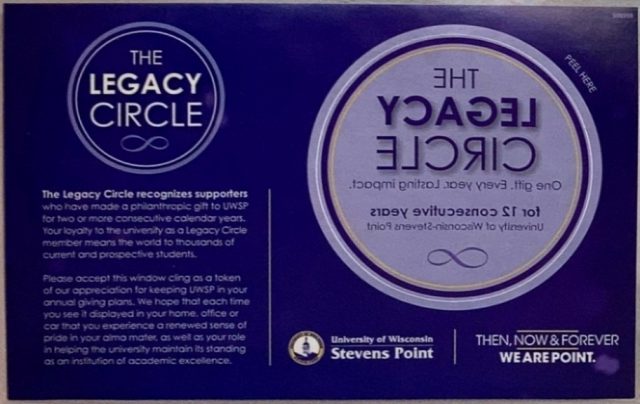 For the last seven years, the University of Wisconsin-Stevens Point has been using window clings as a means of recognizing the consecutive-year donors that make up the school’s Legacy Circle.

We print on the plastic material with a full-color digital press, and personalize each donor’s cling with the number of consecutive years they have given to the university, from two years to more than thirty years.

For UW-Stevens Point, it’s not only a display of school pride, but a reminder to make a gift the following year. To be recognized as a member of the Legacy Circle, you have to make a gift annually. If you miss it, you start over (although some schools with a similar program give donors a chance to “buy back” years that have been missed).

While the artwork has seen minor changes over the years, the placement and shape of the cling to pull off has not. This has allowed UWSP to reuse the same die each year to make the “kiss cut” – the portion of the cling that is peeled off for display – and save money on production costs.

If you look closely at the image, you’ll notice that that the pull-off portion of the cling is printed backwards so it can stick inside part of a window to avoid adverse weather conditions.

How many of us have received a solicitation from a non-profit organization that included a sheet of personalized return-address labels? We’ve all taken them out 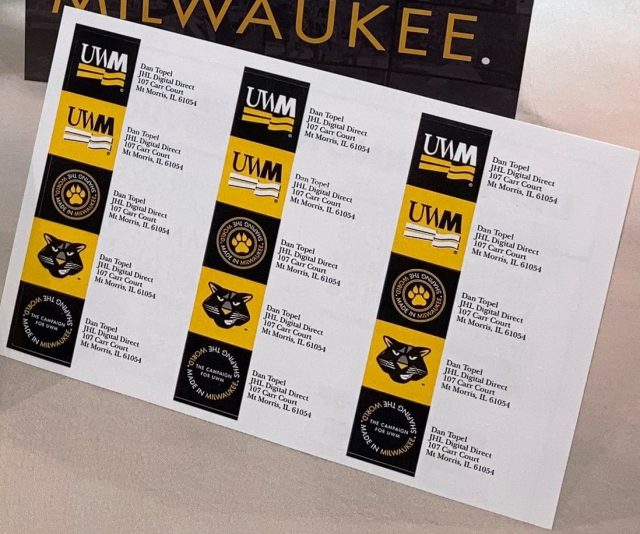 and used them, regardless of whether we donated to the organization. Why write out the return address when you can use a sticker – right?

Often, these labels aren’t the primary reason to make a gift, but an effort to leverage your affinity to expand the brand of the non-profit.

About three years ago, the University of Wisconsin-Milwaukee wanted to include return-address labels with their end-of-year appeal. The labels were pre-printed and cut with a variety of different logomarks associated with the university. A second pass through our printers provided personalization for each recipient on their mailing list.

Was it more likely that someone made a gift because they received mailing labels? That’s hard to say. Did 30 letters get mailed out from each person, branded with a UW-Milwaukee logo? That’s far more likely – and not a bad outcome, regardless of whether one of those letters went back to UWM with a check enclosed.

Have you ever seen a postcard with images that change as you move the angle of the card? That’s lenticular printing. It uses plastic lenticular lenses to produce printed images giving an illusion of depth, or the ability of an object to change or move as they are viewed from different angles. 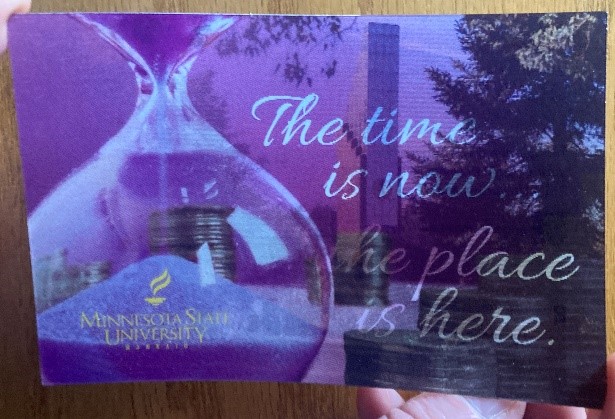 Lenticular printing isn’t necessarily used on things you can stick onto something else, so it’s different than our examples above. Lenticular printing is used primarily on postcards, but has also been used on covers for books, vinyl albums, CD cases and clamshells for DVDs and Blu-ray movies. Some of you may recall lenticular images as the prize inside of Cracker Jack boxes (another example of “free stuff”).

We had found out that Minnesota State University Mankato created a lenticular postcard for a targeted 2022 end-of-year campaign. They used two images that were “interlaced” – or sliced – into fine lines. Each of those lines are aligned with the lens to allow the images to be seen as the card angle is shifted.

Most lenticular projects use no more than ten images, but more complex projects could use as many as thirty images.  Costs vary based on the number of images used and how much set-up time is needed by your printer.

If done correctly with the right use of images, it could easily be a piece with an exciting visual appeal that finds some extra life sitting out on a coffee table. It could also be something that hangs around because it catches the eye of your kids – or perhaps grandkids.

Direct mail continues to be a proven commodity when it comes to advancement. One piece of paper can provide multiple response mechanisms for your audience, whether it be through mail, phone, email, website or social media.

The ideas presented here are a just a few means to help keep your organization to catch the eye of your alumni and donors. There are many more creative ideas being picked up by schools, college, universities and fraternal organizations.

We would enjoy the opportunity to put your creativity on paper and get it in front of your audience. Please reach out and share your ideas with us.